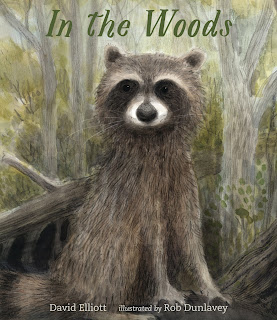 A New York Times best-selling author shares his love for woodland animals in a revealing, beautifully illustrated collection of verse for poetry lovers and budding naturalists.
The animals in the dark woods are secretive, their inner lives a mystery. The stealthy bobcat, the inquisitive raccoon, and the dignified bear waking up from his winter nap are just a few of the glorious animals featured in this clever collection of poems and woodland scenes. This companion to In the Sea, In the Wild, and On the Farm is the first collaboration between David Elliott and Rob Dunlavey, whose colorful, expressive art pairs with the author’s charming poems to create a love letter to the animals of the forest.  (Description from the publisher) 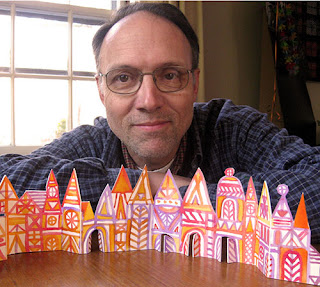 Rob is also the illustrator of Counting Crows by Kathi Appelt (Keeper, The Underneath and The True Blue Scouts of Sugarman Swamp, and many others), Atheneum/Simon & Schuster, 2015. The illustrations were done in pencil with added digital colors.
Since 1986, Rob has also created illustrations for major American newspapers and magazines and educational publishers. He has designed and illustrated computer games. His work is on permanent display throughout the Miami Children’s Museum, The Children’s Museum of the East End (Bridgehampton, NY), The New York Hall of Science and the Public Library in East Hampton, NY. Awards include, The Original Art Show: Society of Illustrators, NY, 3x3 Magazine, PRINT Regional, and American Illustration Annuals.
A native of the tall-grass prairie and oak savannas of suburban Chicago, Rob studied at the Art Institute of Chicago while in high school. In 1980 he was awarded a BA in Painting and Printmaking from Southern Illinois University. In 1984, Rob received an MFA in Sculpture from Claremont Graduate University in Claremont, California.
When he’s not illustrating picture books, Rob is working in his sketchbooks. His personal fine art is “simple and graphic, sophisticated and humorous, sincere but with attitude, oblique yet casually direct”.  A prolific diarist, Rob has filled numerous sketchbooks —at an alarming rate— with imaginative paintings and drawings of castles, owls, herons, crows, frogs, snakes, small birds, foxes, contraptions, animals driving cars and a race of elves he calls “The Pointy People”. Running counter to these whimsical confections is an earnest collection of landscape and wildlife drawings called “Observations.” See examples at www.robd.com
At various times, Rob has been employed as a dishwasher, graphic designer, cartographer, art teacher, archaeologist, botanist, photographer and naturalist. He volunteers at the Museum of Fine Arts in Boston where he gives tours for visitors with vision-related and cognitive and behavioral disabilities.
Rob is married and has two daughters and two cats —but no owls.
Rob Dunlavey’s children’s book illustration is represented by Elena Giovinazzo and Holly McGhee at Pippin Properties, Inc. in New York. (www.pippinproperties.com)